The ordeal of the Bundy family of Clark County, Nevada, against the excessive force and bureaucratic overreach by Federal Government agencies, has had a positive turn in recent weeks.  Cliven Bundy, patriarch of the family, his sons Ryan and Ammon, along with other family members, were acquitted by a jury in 2015 of conspiracy and other charges in connection with the occupation of an empty federal wildlife refuge building in Oregon.  Until recently, they have been held in federal prison for nearly two years, awaiting trial in Nevada on similar charges stemming from a federal assault on their ranch and surrounding grazing lands by armed and militarized agents of various state and federal agencies.  Their alleged crimes?  Their cattle were allegedly trespassing on “public lands”.

After their trial began in Las Vegas late last year, proof of government crimes and corruption emerged during the proceedings to such an extent that the judge declared a mistrial, and a few weeks later dismissed the charges “with prejudice”, meaning they cannot be tried again.

Shortly after their release, Cliven Bundy made a statement outside the office of the Sheriff. 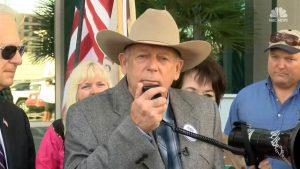 So outrageous was the government’s violent, corrupt, bellicose and criminal conduct, that even Slate Magazine had to side with the victims.  Wrote Mark Joseph Stern:

“However, as Navarro explained from the bench on Monday, the federal government’s subsequent efforts to punish the Bundys for this ranch standoff constituted an “outrageous” violation of their due process rights. To understand how prosecutors flouted the Fifth Amendment, it’s important to understand the charges in the case. The government alleged that the Bundys had engaged in a criminal conspiracy to mobilize armed supporters. According to the indictment, the family used “deceit and deception to recruit gunmen” by “deliberately lying” about federal agents’ heavy-handed tactics. Specifically, the indictment alleged that the Bundys had falsely claimed that the government surrounded their ranch with snipers, and that officers used excessive force while arresting Dave Bundy, Cliven’s son.

There turned out to be a serious flaw in this allegation: The Bundys were telling the truth, and prosecutors were lying. Initially, the government derided the Bundys’ assertion that snipers monitored them during the standoff. But when defense attorneys questioned Dan Love, the special agent in charge of the Bundy crackdown, he admitted that snipers were present around the ranch. (Prosecutors had withheld reports on the snipers’ location.) The government also denied the Bundys’ claim that Dave was arrested with undue violence. But Larry Wooten, a former investigator with the Bureau of Land Management, filed a whistleblower report revealing that bureau officers actually boasted of using excessive force on Dave and “grinding his face into the ground.”

For more on the disgusting behavior of the federal agents and prosecutors in this case, see the rest of the Slate article https://slate.com/news-and-politics/2018/01/the-cliven-bundy-prosecution-was-a-miscarriage-of-justice.html

The sad thing is that this terrible event in US history could have been avoided if the Sheriff of Clark County, Doug Gillespie, would have done the job he was elected to do. Instead of ordering the federal goons out of his county, he sat silent in his office in Las Vegas while a massacre nearly was perpetrated on law-abiding Americans, including men, women, and children.  At the crucial moment when everyone on the scene thought shooting was imminent, a deputy sheriff came to the scene and d-escalated the standoff.

So many people, on either side of the situation, still ask “where was the sheriff?”

Not lost in the joy of the freedom of the victims, is the sadness and injustice in the murder patriot, father, husband and friend, Lavoy Finicum, who was killed by Oregon State Troopers and others as he drove to a meeting with a constitutional sheriff in the next country from the Malheur refuge.  He would likely have been acquitted as well in a trial along with the many other victims of federal and state storm-troopers.  We know that the ultimate judge of us all will bring justice in Lavoy’s case, and we continue to pray for his family and friends.